Nemanja Matic’s fitness has declined, but the Serbian midfielder is still stressed for each match because MU has no other option in the defensive midfielder position.

On the field of Villa Park at dawn on January 16 (Hanoi time), MU was overwhelmed by Aston Villa for most of the second half. The fact that MU received 2 goals in 4 minutes is an inevitable consequence, because Aston Villa too comfortable to maintain attacking pressure in the midfield.

In the calculation of coach Ralf Rangnick, the two central midfielders are the key positions to apply the philosophy of pressing to win the ball in 8 seconds and deploy the ball to score in 10 seconds. Matic was out of breath from the 70th minute, but coach Rangnick still left him on the field, because MU had run out of options on the bench. Scott McTominay is suspended. And Donny van de Beek cannot play defensive midfielder.

Signs of age weighing on Matic

The United Infocus page believes that coach Rangnick is bearing the backlog of the consequences from the time of Ole Gunnar Solskjaer. In nearly 3 years leading MU, Solskjaer spent more than 500 million euros of MU to recruit a series of stars for the defense and striker. But with the central midfield position, the “Red Devils” only received 2 more attacking midfielders, Van de Beek and Bruno Fernandes.

Matic is MU’s only true defensive midfielder since the 2017/18 season. Solskjaer tried to put Fred in that position, but to no avail. Michael Carrick and Darren Fletcher directly coached McTominay with the ambition to help the midfielder become the only anchor midfielder in the MU squad. But the change on the MU coaching bench made the coaching plan for McTominay bankrupt.

Matic did everything to contribute to MU but his fitness was limited. Photo: Reuters.

Now, Matic is still the only defensive midfielder of the MU squad. The match MU was held by Aston Villa 2-2 has clearly reflected the current situation of Matic. He is still classy in the recovery phase, pulling the ball up the line and moving to support the defence. But Matic was physically exhausted at the age of 33, so he couldn’t keep up with the game for 90 minutes.

Matic’s slope is shown specifically through the statistical angle. This season, he played 12 Premier League matches (8 starts). The former Serbia international made an average of 46 passes per game, of which there were 0.6 key passes per game and 1.8 long passes per game.

Matic’s passing performance was clearly reduced compared to himself in his first season at MU.

In the 2017/18 season, Matic contributed 72.3 passes/match, released 0.7 key passes/match and 4.9 long passes/match for MU. Matic’s dribbling and finishing stats in the 2021/22 season have more than halved compared to four years ago.

Matic is no longer a “monster” in defence. This season, he makes 0.3 tackles/match. In the 2017/18 season, that figure of Matic was 1.9 phases/match. During Matic’s peak season at Chelsea (2014/15), he hit 3.5 tackles per game – the best of any Premier League defensive midfielder of the time.

The number of cuts in the game of Matic this season (0.5 times / game) is 3 times lower than the 2017/18 season. The situations that directly relieve the midfielder’s life in 1988 are less than half.

Athletic analyze more specifically about Matic’s current performance in situations that are not shown through the statistical angle.

In the situation where Philippe Coutinho scored a 2-2 equalizer, Aston Villa deployed an easy attack from the middle. From the downline, Tyrone Mings passed to Ollie Watkins. Matic reacted quite slowly to Watkins’ movement, leading to Lindelof having to rush to cover. 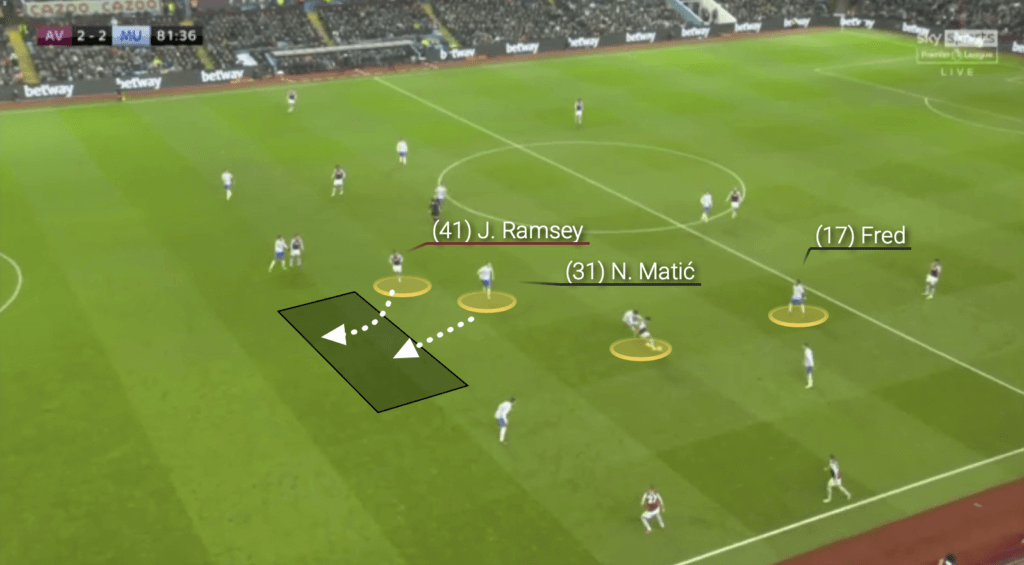 Jacob Ramsey noticed Matic’s slowness, so he snuck back to take up the space. Matic directly followed Ramsey’s drop, but his slow pace and superficiality left him behind. Then, Ramsey stretched for Coutinho to cushion the ball to score. 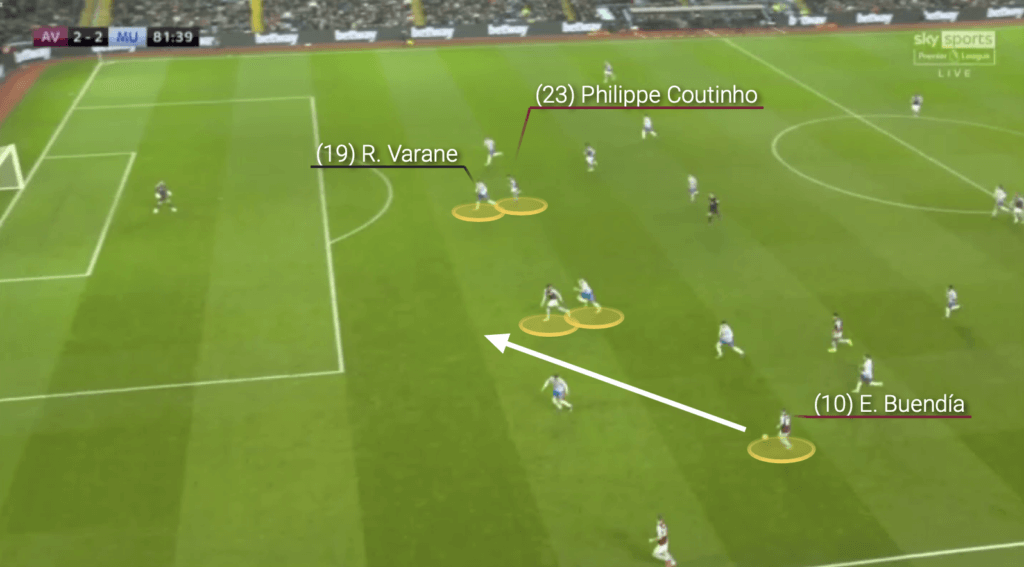 When Matic sat out, coach Rangnick had to use a pair of Fred – McTominay (both specializing in playing shuttle – box to box midfielders) to compensate for the defensive midfield position. Therefore, Rangnick’s calculations are heavily dependent on Matic’s ability to contribute.

That is MU’s fatal weakness compared to the candidates competing for the championship. Man City has Rodri increasingly class under Pep Guardiola. Liverpool have peace of mind with Fabinho. While Chelsea owns Jorginho and Kante are both true and classy defensive midfielders in the Premier League.

Athletic continues to question the transfer of MU, because the defensive midfielder position is playing a key role in modern football tactics. But Solskjaer was the most indifferent to that position, and now makes MU bear the consequences.

The lack of breath of the MU midline is not only reflected in the Aston Villa match. Before Wolverhampton at Old Trafford, the “Red Devils” held the ball only 52%. Coach Rangnick admitted that his students did not impose the game well and the ability to close from the 2nd line was also unimpressive.

Not only the defensive midfielder position, Fred or McTominay is also a problem for MU. Fred surprisingly impressed in the first two games under Rangnick’s reign, but was “back on the ground” because he only had aggressive pressing as his strong point. Fred constantly controlled the error ball, was not fast enough to escape pressing in the Premier League environment and was poor in contention because of his limited fitness.

McTominay has the ideal physique and fitness, but the Scottish midfielder’s sense of position, passing skill set and defensive mindset are not enough to become the star of the midfield.

Paul Pogba will return to the MU squad this month. If Pogba wholeheartedly devotes to MU and regains his best form, the problem of ball rotation, pressing escape and creating from MU’s lower line with long balls can find a solution. But with Matic’s position, the Manchester Evening News emphasized that coach Rangnick urgently needs to add.

MU has drawn up a list that includes a series of potential candidates for the position of defensive midfielder. Quality midfield group has Declan Rice, Jude Bellingham. Aston Villa’s John McGinn is the preferred name of Technical Director Darren Fletcher. Aurelien Tchouameni (Monaco) Amadou Haidara (Leipzig) and Denis Zakaria (Gladbach) are in the backup if MU fails at the top goals.

Recruiting a high-class defensive midfielder is a mandatory move for MU after this summer. But in the immediate future, coach Rangnick needs a name “fire fighting” to share the burden with Matic. Zakaria, a deal worth 5 million euros, is said to be MU’s best option. Haidara and Tchouameni could leave the club right now. As for Rice and Bellingham, MU has to wait until the end of the season.